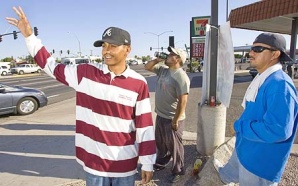 
Once at the center of controversy, s day laborers have become increasingly scarce as residents make fewer complaints about them and their numbers dwindle.

Experts, and leaders and laborers credit the changes to the slow economy, which has meant lower wages and less consistent work for day laborers. Some also attribute the decline to intimidation from anti-immigrant activism and legislation, leading many to leave the state in search of more promising markets.

It is a stark contrast from just a few years ago, when hundreds of day laborers would hit the streets of Valley cities each morning and visit work centers in search of jobs ranging from construction to house cleaning.

“The money was good then,” said Trinidad Vasquez of Mesa, who stood at Gilbert and Broadway roads last week hoping for work. “I could work seven days a week if I wanted to.”

These days, he hasn’t been so lucky.

Salvador Reza, coordinator for the Macehualli Work Center in Phoenix, said that at the site’s peak two years ago, 60 of the 120 day laborers there would find work. Now, the center averages 75 workers a day, with perhaps only 10 getting work, Reza said.

Nik Theodore, a professor at the University of Illinois at Chicago and co-author of a 2006 study on day labor in the United States, said that unlike downturns in the 1990s or in 2001, this recession has hit the day-laborer population directly.

“This is the first one that hit the housing market so severely,” he said.

But Theodore said that when construction projects across the country came to a halt, many day laborers lost their relatively stable income.

On a recent day at Gilbert and Broadway, laborer Julio Zayas noted that “only three people have been picked up today.” A few years ago, all 15 of the men would have found jobs.

Gone are the days when a worker would get hired for a job that took three days, Vasquez said. Four-hour shifts and odd jobs around the house are the new norm.

But Zayas said the day laborers who continue to come to the Valley’s corners each day do so because they have bills to pay in the United States and money to send to family members in their native country.

“It’s beginning to be a trend,” he said. “Usually, they wouldn’t go for less than $10. But in a situation this bad, someone offers $7 and they’ll go.”

Vasquez and Zayas said they have noticed a similar trend. While Vasquez said he doesn’t accept anything less than $8 per hour, he’s known of others who will take as low as $5 per hour.

Theodore said that although he doesn’t have any recent data, he suspects the median hourly wage has dropped substantially from its 2006 level of $10.

In 2005, one in two laborers reported having been cheated at least once.

“In better times, you would walk off a job after a day or two of not getting paid,” he said. “Now they’re working for longer periods of times because they’re desperate.”

Newman said more day-labor groups are banding together against the “pronounced and vitriolic anti-immigration sentiment” in Arizona that has silenced many workers‘ rights.

Rather than continue fighting for higher standards, Mesa pastor Magdalena Schwartz said she’s known many who just move to other states, such as Texas or California, or else back to their home country.

“This is the reality for a lot of people,” said Schwartz, of Discípulos del Reino. “They have to move because they can’t find a job here.”

But while many day laborers have left the state, Newman said he had faith that the ones who have stayed will get through the economic storm that has gripped the country.

“They’re used to living at the margins,” he said. “They make do by surviving on less and continuously looking for opportunities for work.”

andy Springs can’t do anything about the day laborers lingering at major Roswell Road intersections, hoping that a passing car will bring work.

That’s because anyone can be in the public right of way. Plus, the upscale city has admitted it has — and needs — those kinds of workers by adopting a new local law that focuses more on traffic than its does the people on the sidewalk.

“We are not stopping anyone from seeking employment or from hiring, ” councilman Rusty Paul said. “We are just trying to be smart about safety.”

The problem has come from the traffic jams — and risks to pedestrians — created when a driver stops to offer work. Police Chief Terry Sult said the workers will ignore traffic in their rush to land a job, creating hazards and sudden stops on some of the city’s most heavily traveled roads.

In some cases, the workers swarm around a potential employer so quickly it blocks traffic completely, Sult said.

So under the new law, the city will fine any driver who doesn’t pull off and park to hire the workers. The citation is $250 for the first offense, $500 for the second and $1,000 and up to three months in jail for the third.

“There is an orderly way to do things,” Sult said. “We can’t have people slamming on their brakes because someone in front of them decides to stop and hire someone.”

The city weighed the issue for a month before approving it Tuesday. No one spoke out against the measure, and some churches have even signaled they approve of the push for safety.

The new law does limit where people can solicit work. The laborers face the same fines for being on private property, such as parking lots, unless the owners give permission.

The laborers also have to stay 300 feet away from freeway ramps, city attorney Wendell Willard said.

City officials said they hope the new law will encourage more of the hiring centers like the one that Holy Spirit Catholic Church opened on Northwoods Drive earlier this year.

There, workers register for jobs daily and the staff helps keep track of there comings and goings as a way to protect them from being mistreated. Plans are also under way to offer language classes for workers as they wait.

“I am very proud of our community for doing this,” Mayor Eva Galambos said. “We are doing the right thing by everyone.”