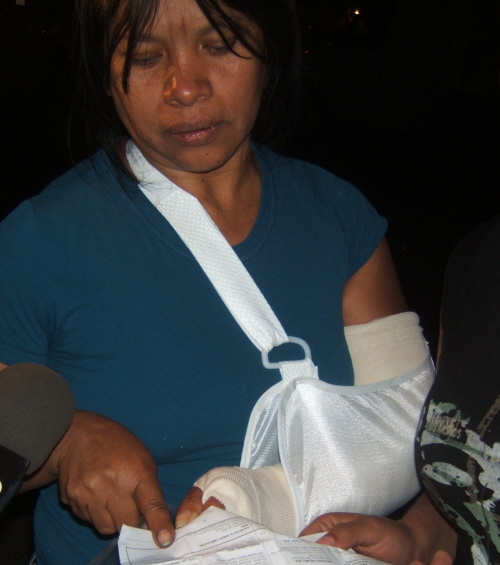 Immigration and Customs Enforcement released a suspected illegal immigrant Thursday night after it was determined that her arm had been broken while she was in MCSO custody.

Maria del Carmen Garcia Martinez was released on her own recognizance, her left arm slung in a cast after she received at St. Joseph’s. She had been turned over to ICE earlier in the day by the MCSO. ICE took her to St. Joseph’s for medical attention, photographed her injuries and released her with a pending court date around 8 p.m. from its offices on Central Ave.

Martinez, 47, was met by her family, Respect/Respeto activist Lydia Guzman and a couple of reporters, including yours truly. Her left arm was swollen as was her leg and ankle. As her daughter Sandra translated, she explained that she was recently arrested by the Phoenix Police Department, after she was questioned about posting signs for a yard .

She said she was arrested for a having a fraudulent I.D., even though her I.D. was an out-of-date I.D. card from California, according to her. Martinez was then collared and booked into MCSO custody.

(Oddly, the Phoenix PD’s on-call spokesperson, an Officer Holmes, said he could find no record of Martinez in their system.)

While in custody at Lower Buckeye Jail, Martinez said she was brutalized by six MCSO detention officers, who were trying to get her to put her fingerprints on a voluntrary removal order, a document wherein an undocumented foreign national gives his or her consent to be repatriated.

(Lydia Guzman asserted that sometimes MCSO will attempt to get a fingerprint instead of a signature for the VR form. An ICE spokesman had no immediate explanation for this procedure.)

Martinez refused, as was her right, but the officers tried to force her, she said. They stepped on her, twisted her arm, and beat her. She noticed that one of the officers was Hispanic.

“Why are you doing this to me, when you came from Mexico also,” she told the Hispanic guard.

She was placed in a cell by herself, and later that night she was visited by eight MCSO officers, who warned her to sign the VR, or, “We’re all going to get you,” she said they told her.

Martinez’s right hand was swollen, and stained with blue ink.

A fellow inmate advised Martinez’s daughter that her mother had been beat down. She feared for her mother’s life, and advised her lawyers, who filed an emergency stay on Martinez’s behalf.

According to her daughter Sandra, Martinez was a housemom, who stayed home and took care of the family. Martinez’s husband works as a handyman. They came here three years ago from California, looking for a less expensive way of life.

“I’m proud of her, and I’m glad that she’s out,” said Sandra, her eyes welling with tears. “I couldn’t sleep. I would think of her, and cry every night because I missed her so much.”

Ironically, because the MCSO has apparently abused her, Martinez may get to stay in this country permanently, noted Guzman, who has been following the case since Martinez was arrested.