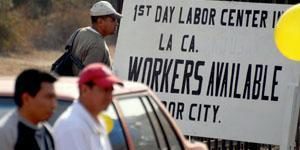 After seven months of using a cluster of picnic tables as a base to solicit work each day, a group of day laborers who congregate at Ken Malloy Harbor Regional Park now have a new hiring site complete with a trailer, signs and a parking area.

But the Harbor City Day Laborer office, nearby at North Figueroa Place and Pacific Coast Highway, is still without amenities as the days get colder and wetter.

“It’s cold out here,” laborer Jose Saenz said. “We’re doing the best we can. We’re wearing two or three sweaters and a jacket. All the little things you do to stay warm.”

Last April, the workers were forced to leave their hiring site of 19 years when construction began on a storm drain project on Vermont Avenue.

They moved up the street to the picnic tables, where they had no bathrooms and nothing to shield them from the elements. It was also just a matter of time before the construction would move to their side of the street.

In mid-November, the workers were given their current site, but it is unclear whether the spot is permanent.

“We’re happy we’ve got a place, and we’re glad to be away from the construction,” laborer Ed Soto said.

The day laborer program is operated by the nonprofit Instituto de Educacion Popular del Sur de California. Workers arrive at 6 a.m. and register for a lottery system. They all work for set wages.

The new trailer still does not have running water or electricity, but once it does, the workers will be able to plug in the refrigerator and coffee maker they have already acquired. They also have a computer desk and filing cabinets and plan to get a microwave oven once they’re more settled.

The city recently approved installation of electricity, gravel for the parking area and a fence, so the laborers hope to have amenities by next week.

The city had hoped to have the laborers relocated by the end of the summer, but experienced delays that lasted for months. In May, the Figueroa Place site was proposed. In October, the site was changed to the southwest corner of the park. In November, it was switched back to Figueroa Place. Finally in mid-November, the day laborers were given the keys to a donated trailer.

Cole did not know the details of the lease or how the issues were resolved. Recreation and Parks did not return phone calls seeking comment, and employees at the Community Development Department said they did not know what else, if anything, contributed to the delays and site changes. Joeann Valle, executive director of the Harbor Gateway Chamber of Commerce, said she was not ready to discuss the topic.

Councilwoman Janice Hahn’s office also declined to comment on reasons for the delay, but did say the location was chosen because it is convenient, but not intrusive.

“During these alarming economic times, the need for a legitimate day laborer site is more important than ever,” she wrote in an e-mail. “The new location is a good, safe and easily accessible location.”

The laborers have been struggling to get business because recent rains have closed many construction sites, but they said business had started to pick up in the two weeks before the rain as people learned about the new site.

“We get people with water damage who need sandbags propped against their homes,” Saenz said.

The site is muddy because gravel had not been laid in the parking area, and the workers have been using tarps to stay dry.

Los Angeles Harbor College, which is located next door, had hoped to build a parking lot on the site of the trailer. But now that the land is being used, UCLA and Harbor College have also begun discussing possible outreach and education programming, said Manuel Mancia, a volunteer for the nonprofit that operates the program.

At the top of the workers’ wish list: basic English classes.

“Everybody wants to be bilingual,” Saenz said. “They say you count for two if you’re bilingual.”