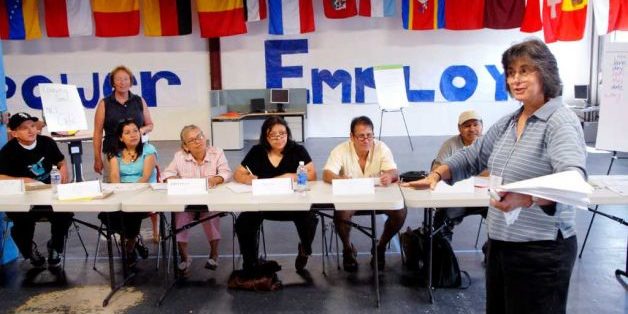 STAMFORD — There are three words painted in blue on the concrete walls of the newly opened immigration center in Waterside — educate, empower, employ.

It’s the mission statement of Neighbors Link Stamford, a nonprofit dedicated to providing resources for local immigrants. The program has been years in the making, and Executive Director Catalina Samper Horak said she still can’t believe it’s finally come to fruition.

“There’s so many people who feel a sense of ownership of this center,” she said one morning last week. “We made it. We finally got it.”

Horak said the nonprofit is intended to be a “point of entry” for Stamford’s immigrant population. The program is modeled after the Neighbors Link center in Mount Kisco, N.Y., which has provided adult education, tutoring, computer training and employment development to the city’s immigrant community for the past 10 years. Horak served on the Mount Kisco center’s board of directors for seven years.

Neighbors Link Stamford celebrated its grand opening June 12, after initial resistance from some who worried the program would encourage day laborers to loiter outside the Selleck Street location. Rick Allen, a member of the Waterside Coalition, a neighborhood group on the West Side, said he was at first skeptical of the new organization, but is now a full supporter.

“We had kind of started out on a negative note because no one knew what the center was about,” Allen said. “But over the last few weeks, members of the coalition have come down to visit the center and it is awesome. They need our support and we need their support, so we’re all working on this together.”

Horak said Neighbors Link Stamford will one day serve as a safe and se hiring site where workers can wait for employers while taking English and computer classes. For the moment, however, the center is focusing on an overwhelming need from the local immigrant population for English instruction.

“We are supporting every single person in the immigrant community no matter where they are on the spectrum,” Horak said. “But we’re not talking about (the day laborer) component right now because we’re focusing on the education aspect. So that’s our big emphasis right now. We’re all about integration.”

Neighbors Link provides free daily English lessons to local immigrants on a walk-in basis, Horak said. The classes are led by volunteer ESL-certified instructors. On-site babysitting is also available for parents while they participate in classes.

More than a dozen people showed up for the June 27 English class taught by Jean Daniels. The group sat at plastic folding tables in front of a large whiteboard, on which Daniels wrote the five vowels of the English alphabet.

“The idea is to give them enough English so they can go out and get a job,” Daniels said. “But they’re open to anything, so whatever you can give them, they’re very appreciative. I think it’s excellent. I think it’s a good resource for the community.”

Private tutoring is also available for more advanced students. Martha Cortes, who moved to the United States from Colombia 22 years ago, drives to Neighbors Link Stamford every day from Norwalk for English lessons. On Monday, she received grammar and pronunciation help from Sakshi Bhatnagar, a 17-year-old high school senior at the Academy of Information Technology & Engineering in Stamford.

“This program is very good,” Cortes said. “I’m coming here Monday through Friday to improve my English and practice my grammar, and in the afternoon I take computer classes.”

Cortes worked for an aerospace manufacturing company for 16 years before losing her job when the company relocated. She said she is now hoping to improve her English writing skills so she can begin a new career in the health care industry.

“That’s why I have to practice my grammar,” Cortes said. “Right now, my goal is to improve my English so I can find a job.”

Neighbors Link Stamford is run by volunteers and funded entirely through private donations from individuals, foundations and religious organizations, Horak said. The center works with other local nonprofits to ensure services are enhanced, rather than duplicated. Immigrants looking for help with mental health, mortgage or citizenship questions will be directed to the proper resources, Horak said.

Horak, the center’s only paid employee, immigrated to the United States from Colombia in 1981 and now lives in Darien.

“I can totally relate to what people are going through here, the difficulties of raising children in another culture,” Horak said.

She said the center’s location on the West Side makes it easily accessible to many members of the local immigrant population, who can walk or take a bus to the center.