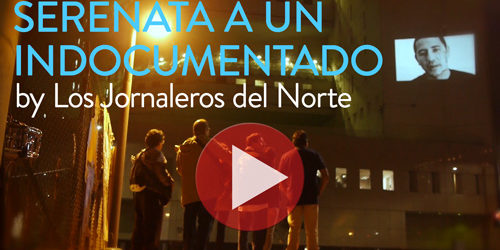 (Los Angeles) Today, the National Day Laborer Organizing Network (NDLON) and Los Jornaleros del Norte “the house band for the immigrant rights movement,” released today a groundbreaking new video to combat deportations. The video corresponds with announced plans for a “tour” with concerts outside of immigrant prisons throughout the United States.

Click here or on image above to watch video.

The making of this extraordinary video

During one of the Los Angeles shows, a mother arrived with her two children to celebrate her husband’s birthday. She brought balloons, flowers, and love for her jailed loved one to see across the street from the tiny jail cell window. Omar León, lead singer of Los Jornaleros del Norte, approached her to ask why she was there and she shared with him her story.

Omar turned that story into this beautiful song. It serves as testimony that arts and culture enable people who face and struggle against injustice to turn circumstances of oppression into practices of emancipation. “Serenata a un Indocumentado” is not just a song; it is an enduring historical document that tells the world that beautiful acts of love can happen in the face of ugly suffering.

Shot by acclaimed film director Alex Rivera on the same day of the President’s speech announcing administrative relief, the video depicts Los Jornaleros, true to their purpose, standing on a corner across the Metropolitan Detention Center, serenading the detainees inside while videos of jornaleras and jornaleros are projected onto its walls.

Inspired by the actions, several artists pledged their support, and organizers from around the country asked if we could do similar events in their hometowns.  So Los Jornaleros decided to launch a new “tour.” Our next event is now set to start in Adelanto, CA on Sunday, March 29, 2015, with additional artists and dates yet to be announced.

This is the sentiment and culture of protest, love, resistance, and struggle that we hope the Serenata concerts will replicate across the country. From San Diego to Maricopa County, from Texas to Alabama and beyond, music will serve as a tool to uplift immigrants’ humanity. We will highlight and redress family separation, unjust detention, inhumane incarceration conditions, criminalization of communities of color, and senseless deportations. We will confront dehumanization and unite in song to overcome walls that divide our community into deserving and undeserving, good and bad, winners and losers.

From San Diego to Maricopa County, from Texas to Alabama and beyond, music will serve as a tool to denounce the dehumanization of immigrants, to “Chant down the Walls” of Injustice, and to combat a dangerous trend dividing the immigrant community into artificial categories of “deserving” and “undeserving.”   Throughout the tour and related actions, music will be used to highlight and redress family separation, unjust detention, poor incarceration conditions, criminalization of communities of color, and senseless deportations.

At NDLON, we have always worked with poets, bands, and singers — inside and outside of the day labor community — to elevate the voices of those confronting injustice and to change the terms of debate.  Together with our member organizations Tonatierra and PUENTE, we first did jail concerts in Phoenix with artists like Manu Chao, Zack de la Rocha and Little Joe.  Rather than submit to state-sanctioned rituals of humiliation, we brought beautiful songs to Joe Arpaio’s concentration camps, to tell those behind bars that they are not alone.  In Arizona, where state law literally seeks to punish all immigrants and make them miserable, artistic celebration has become an act of resistance. That’s just what we did when Jenni Rivera performed for 50,000 protestors on the capitol lawn.