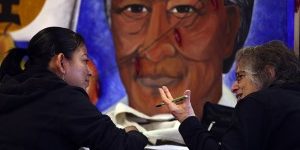 As the Graton Day Labor Center turns 10, Dr. Loco’s Rockin’ Jalapeño Band will be on hand to celebrate the anniversary with its award-winning blend of Mexican-American rhythm. During that decade, the center has come a long way from its humble beginnings, evolving from a hiring hall into a nonprofit organization with two full-time and two part-time staff who serve about 70 workers a day, depending on the season.

“The workers themselves do a lot to keep the center going,” said hiring coordinator Omar Gallardo. The population of workers has increased significantly, with many arriving from the state of Oaxaca, in southern Mexico.

“What we have now is the result of a true collaborative effort between the workers, volunteers, neighbors and community leaders,” said Christy Lubin, a longtime volunteer and Graton resident who chairs the Center’s board of directors. The need for organizing immigrant labor in the town became apparent many years ago, she said, when residents became concerned about the growing numbers of laborers who were camping out near the creek.

Two year-old Jesus Hernandez accompanied his uncle Luis Gutierrez to the Graton Day Labor Center, Tuesday March 29, 2011 as he checks in to find work. The wet winter has led to a slowdown of labor jobs, equating to a a larger pool of workers looking for employment. (Kent Porter / Press Democrat) 2011

“A group of volunteers came together to work on the issue because we didn’t want an ‘us and them’ mentality to develop,” she said. “We’re all human. We have a responsibility to make sure people in our community are not living outdoors without clean water or toilets.”

The group’s early efforts included serving free coffee at Mexico Lindo on Saturday mornings, and inviting people in to discuss the workers’ needs. From there a basic hiring system evolved, first operating from a card table in front of the Graton Community Club. It took several more years for the larger community to reach consensus on a physical hiring hall for day laborers, and to work out the logistics of space, support and services.

Among the needs they address, education has always been a priority. “All workers have basic human rights,” Lubin said, “whatever their immigration status.” The Center educates workers on their rights, and on their responsibilities as employees and community members. “Employers need to be educated, too,” she added. While wineries and vineyards do some of the hiring, a lot of the work comes from homeowners who need help with landscaping, cleanup projects and home improvement. The Center acts as a mediator, ensuring that fair labor arrangements are made and upheld by all parties.

“We are offering a service to employers as well. They know the person they are hiring has been ‘vouched for,’ and every aspect of the job is communicated clearly,” said Lubin.

In addition to managing labor, the Center provides housing referrals, access to health care, and English tutoring, all free of charge to the workers. It also functions as a social gathering place. Most of the people it serves are far from their homes and families, with no social network here. “Even when there is no work available, they always have a place to go, something productive to do and a feeling of belonging, of being a part of the social fabric.”

Saturday’s event will include a performance by Santa Rosa’s Imaginists Theatre Collective. A Mexican dinner will be available for , along with beverages, with all proceeds benefiting the Center.

Children enter free; no one turned away for lack of funds