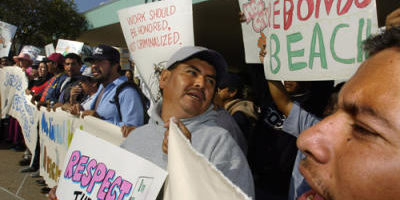 A federal appeals court on Monday listened to arguments to reconsider a ruling that allowed Redondo Beach to resume arresting day laborers for standing on streets and soliciting work from people inside cars.

The 11-judge, special en banc proceeding of the Ninth U.S. Circuit Court of Appeals was called after a divided three-judge panel found last June that the city could enforce its 1987 ordinance regulating solicitation of employment from streets.

The prior appellate court decision arose from a subsequently challenged, late-2004 move by the city to conduct “sweeps” of job seekers at the intersection of Manhattan Beach Boulevard and Inglewood Avenue after nearby business owners complained about the activity.

In arguments Monday before the court in San Francisco, Redondo Beach City Attorney Mike Webb said that when the city passed its ordinance, it “copied word for word” a Phoenix law that was upheld by the Ninth Circuit in 1986.

That case, ACORN v. City of Phoenix, involved the city preventing members of the political organization ACORN from asking for donations from occupants of vehicles stopped at traffic lights.

Redondo Beach Municipal Code section 3-7.1601 states that it is unlawful for someone to stand on a street or highway and attempt to solicit employment, business or contributions from an occupant of a motor vehicle.

The legislation also makes it illegal for occupants of a vehicle to stop on a street or highway to hire someone for work.

The law violates the free-speech guarantee of the U.S. Constitution’s First Amendment, said the Mexican American Legal Defense and Educational Fund, which, along with a day-laborer advocacy group, sued the city.

Saenz contended that if the city’s aim was to prevent interference with traffic flow, it could enforce laws governing jaywalking, obstructing traffic and illegally stopping vehicles.

Because the ordinance targets only those on the street looking for work, and not other acts of street-side solicitation, the law is discriminatory, Saenz said.

The court panel will issue an opinion at a later date.

Fewer than 20 cases each year are given en banc review, according to the court.