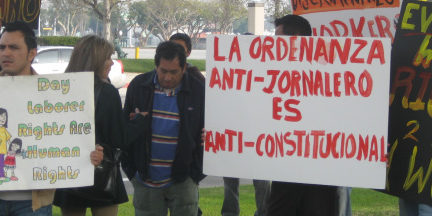 (Image Credit: Susan Valot/KPCC) Day laborers and supporters hold signs while they chant and sing outside Costa Mesa City Hall. Civil rights groups have filed a lawsuit on their behalf against the city's enforcement of an anti-solicitation ordinance.

Costa Mesa has stopped enforcing its anti-solicitation ordinance that bars day laborers from looking for work on sidewalks and public land. The halt comes after the ACLU and other groups sued the city.

They say the city singled them out under its ordinance that bans soliciting business on sidewalks or public property. The lawsuit claims the law violates free speech rights.

Costa Mesa officials decided to temporarily stop enforcing the ordinance until the 9th U.S. Circuit Court of Appeals rules on a similar case in Redondo Beach.

That case has been working its way through the courts for several years, since a federal judge four years ago decided that Redondo Beach had violated free speech law by cracking down on day laborers with the anti-solicitation ordinance.