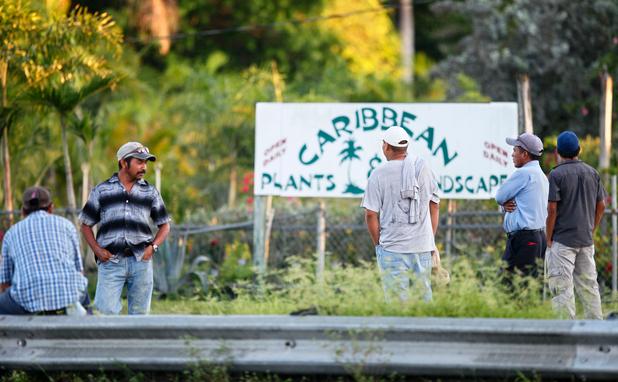 LOXAHATCHEE GROVES — Workers are back at street corners along Okeechobee Boulevard, hoping to trade manual toil for money.

The slow economy forced the hand of the church that ran the center, said the Rev. Calvin Lyerla of Acts II Worship Center.

“We just could no longer justify the expense,” Lyerla said.

The 500-member Pentecostal congregation footed the entire $50,000 annual budget to run Buena Fe, which opened in March 2008. The center couldn’t find partners, and county agencies rejected the half-dozen or so grants it sought, Lyerla said.

“They were providing a great service to the town,” Mayor Dave Browning said.

Only 15 to 20 workers came to Buena Fe daily this year, about half the number compared with early days. And only 8 to 10 employers used the center daily for the same period. The center registered a total of 1,065 workers and 87 employers.

For a while, Buena Fe boomed. Plenty of migrant workers, most from Mexico and Guatemala, biked to the double-wide trailer on Okeechobee Boulevard. That kept drivers and workers safe; Okeechobee Boulevard is a quick-moving thoroughfare that doesn’t lend itself to the stop-and-go traffic of employers scouting for laborers.

Now the town is left with its original problem.

“It’s not quite as bad because there’s less work,” Browning said. “At the same time, everybody who doesn’t have a job is out there looking for work. There are eight to 10 guys at the stops. It becomes a safety issue.”

The town council in 2008 approved an ordinance banning workers from hawking manual skills on local street corners. But the law has no traction unless they have some other place to meet.

“Legally, I don’t know that we can prevent people from meeting on the road, even though it’s dangerous,” Browning said.

Loxahatchee Groves Landowners Association President Marge Herzog also is concerned about whether children waiting at bus stops near the corners in pre-dawn hours will be comfortable with a group of men nearby.

“It has been an issue for the young girls, the catcalling, the ‘hey girlie,’” said Herzog, who was vice mayor when opened.

Meanwhile, Caribbean Plants at F Road and Okeechobee Boulevard, has agreed to let workers gather there, which could help, Lyerla said.

Buena Fe’s shuttering follows that of the Lake Worth Resource Center, which closed in December after two years. El Sol in Jupiter is still open, launching in September 2006.