Founded in 1992 in Hempstead, Long Island, the Workplace Project fights for socioeconomic justice and has strengthened workers rights for Latino immigrants by promoting their full political and economic participation within their communities.

Latino immigrants face many obstacles on Long Island. Aside from the exploitation many of them face on the job, there is also a perception that these workers are responsible for displacing natural citizens from employment.

“This wrong idea that immigrant workers are here to keep the jobs that other people deserve,” said Omar Angel Perez, Executive Director of The Workplace Project, in addressing his goal to fight this misconception.

“Through the Women’s Cooperatives Program, we do outreach to woman who clean households, and we invite them to come, and they get training to do on the job,” said Perez.

Other works include the day laborer program, where workers are educated on how to negotiate a salary, a service contract, and what financial records to keep.

The Workplace Project encourages day laborers and domestic help to join with community members and other immigrants to ensure they are not abused or discriminated against while employed.

“They don’t have the right training to do the job or they don’t get special machines,” said Perez. “We face a lot of problems like injuries and accidents,” he said.

The Workplace Project recruits members by going out into local churches and schools, as well as working with Spanish-speaking media.

“The women’s cooperative member go out and talk to the women on the street, talk to the women outside their workplaces,” said Perez. But they successfully target males as well. “With day laborers, we go directly to the corner and give them flyers, with their permission, about their position and what to do when they have any problem,” he said.

Omar has more to say in the following interview:

The efforts of the Workplace Project have resulted in both local and state legislation to protect all workers, not just immigrants. Members of UNITY, a domestic housecleaning cooperative became strong supporters of legislation and worked to get a law passed in Nassau County. This legislation requires that employment agencies give domestic workers contract forms and notices of their rights, like facts about the minimum wage, overtime regulations and Social Security.

Not satisfied with their local recognition, The Workplace Project pressed on for a statewide law. On August 31, 2010 Governor David Paterson signed the Domestic Worker Bill of Rights
This law will provide the same rights to domestic workers as are provided to other workers in New York State. The bill became law on November 29, 2010.

“The next step is to be sure that these laws are going to be implemented,” said Perez. The group is on a six year campaign seeking enforcement of this law and to ensure that the law also covers other groups, such as day laborers and low- wage workers.

Their message to lawmakers is simple: the repression of day laborers and other domestic assistants seeking employment is counterproductive. They cite a Hofstra University Study, conducted in conjunction with Long Island Day Laborers, indicating an increase in human rights violations.

“If we can get more protection for low-wage workers, it will help increase wages for all the workers,” said Perez.

His group is also trying to ensure that those who employ immigrants will follow the new laws.

Perez knows The Workplace Project will be a vital link between the economy and those who perform many of its necessary services.

Empowering and protecting immigrant worker rights remains an ongoing goal for Perez, but so too is fighting the perception that immigrants somehow threaten the Long Island livelihood.

“We want Long Islanders to understand that the immigrant community is part of the larger community of Long Island, he said. ” 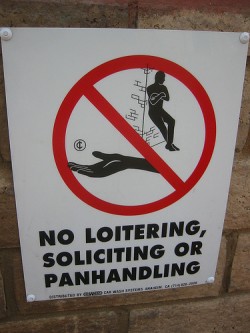 Once upon a time, Herndon, a small town in Virginia, could no longer tolerate the sight of Latino men soliciting jobs in public places.

It made an ordinance, specifically forbidding day laborers from finding jobs. The law was nothing more than an ugly and xenophobic attempt to get rid of the Latinos on the sidewalk looking for work. A Fairfax County judge rightly struck it down as unconstitutional.

Herdon did not learn its lesson. At a time when unemployment is soaring through the roof, Herndon would rather prevent people from finding jobs and making ends meet. The outgoing city council moved to enact a broader ordinance, banning all solicitation on streets and sidewalks. The result? Now cheerleaders, non-profit fundraisers by community groups, and panhandlers are banned from soliciting money, too.

The law continues to quash free speech with the sole intent of discriminating against mostly Latino laborers seeking day-to-day employment. Indeed, the original draft of the ordinance proposed to “eliminate the visual blight of Latino workers.” This has not set well with some Herndon residents who complain that the measure is anti-immigrant and has nothing to do with the public safety concerns raised by its proponents.

Virginia New Majority and the National Day Laborer National Network (NDLON) are some of the organizations working on rescinding the bill. The organizations have already threatened to file suit against the city if it does not amend or abolish the ordinance.

The incoming city council is open to reviewing and amending the bill so that it passes constitutional muster in a court of law. Restore sanity in Herndon. Ask the City Council to end the restrictions against day laborers.

Prerna Lal is co-founder and Online Coordinator of DreamActivist and a board member of Immigration Equality. She is currently attending George Washington University Law School.