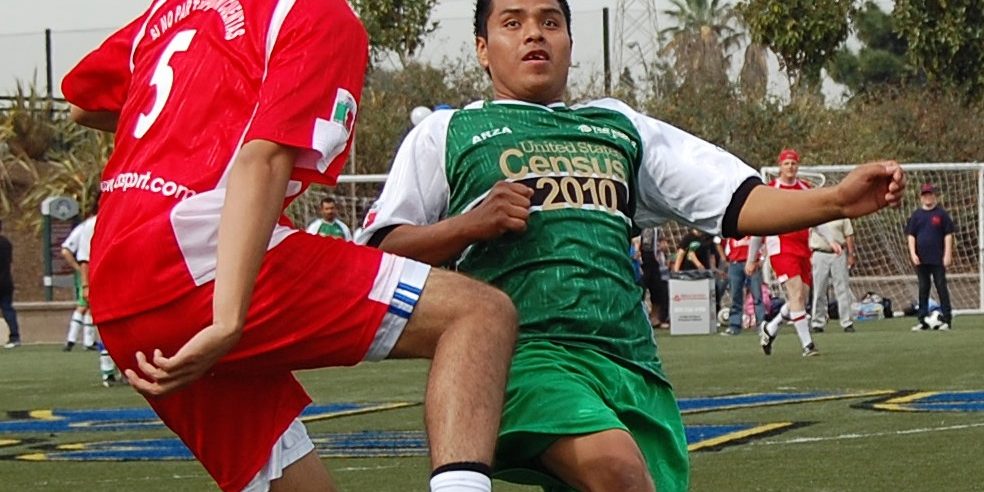 The Day Laborers of the Inland Empire took the “Yo Si Cuento” (I Do Count) trophy home on Sunday — and will keep it for the next 10 years.

Census workers gave all they could but were unable to defeat the jornaleros in the first game of Sunday’s tournament. (EGP Photo by Eloisa España)

U.S. Census Bureau workers and Spanish language media reps took on the day laborers (jornaleros in Spanish) at a soccer tournament to symbolize that they, jornaleros, do count in the Census.

Agustin Duran, Partnership Spet of the Los Angeles Regional Census Center said they chose the city of Bell Gardens to host the tournament because it is in the East L.A. region; the second hardest to count area in the nation.

“We decided to play with the jornaleros because it is one of the hardest to count groups in the Latino community,” he said.

The tournament, which was free to attend, was put on with “cooperation from the city, the Census and also from NALEO and other community organizations,” said Duran, sharing that this is the first time an event like this has taken place in Bell Gardens.

Spectators who turned out to watch the soccer competition, were also able to take advantage of the Census Questionnaire Assistance Center set up to help people in need of assistance filling out their Census form.

Census workers now have ten years to prepare for the next tournament, and a chance to win back the trophy.