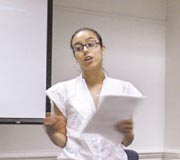 When the Centreville Labor Resource Center opens, its organizers want it to be a success, so they recently invited two, day-labor marketing spets to give them .

And on Sept. 27, Sarahi Uribe and Francisco Pacheco spoke with members of the Centreville Immigration Forum (CIF), which will help with the center’s day-to-day operation, under the guidance of a full-time, professional director.

“With the economic situation so bad, it’s incredibly important to do marketing,” said Uribe in English, while Pacheco said the same thing in Spanish to the workers attending the meeting. “But it depends on each organization’s resources and the workers must be involved in the marketing strategy.”

The new center is to help Centreville’s day laborers find jobs, as well as to remove them from street corners near the library and a ping area. The CIF has been busily raising money for it and interviewing potential staff members and hopes to have it operational by the end of the year.

Al Dwoskin, who owns the Centreville Square Shopping Center, proposed the idea for the center and will donate one of his storefronts for it and will pay for utilities. Funding for salaries and other items is coming from grants and private donations.

“We’re in the process of interviewing applicants for the position of center director,” said CIF President Alice Foltz. “When that position is filled, we’ll be able to set the opening date. This means that plans for opening are contingent on our finding the right person and getting that person here and on the job. We hope this will happen in the next couple months.”

Meanwhile, plans are moving forward for the center, which will be open Monday-Saturday, from 6 a.m.-noon. Prospective employers will come directly there to hire workers, instead of picking them up from the streets. That way, an organized system will be in place, jobs will be fairly distributed among all the immigrants participating and workers will be paid for their labor.

Uribe and Pacheco, both regional organizers with the National Day-Laborer Organizing Network, shared their knowledge and tips with the CIF. “We’re based in Washington, D.C., but we work with day-labor centers all over the country,” said Uribe. “And it’s exciting that you’re going to open one here.”

To successfully market their skills, she said, they must first learn about the neighborhood’s needs. “For example, are there construction sites nearby?” she asked. “What is the demand for workers? What are the jobs you see in this area?”

Pacheco then asked the workers at the meeting to tell him their skills and he made a list of the types of jobs for which they’re qualified. These jobs included: Painting, remodeling, new construction, gardening, moving, installing hardwood floors, ceramics work, plumbing, electrical work, carpentry – both fine carpentry and for construction, restaurant work, roofing, installing siding, working in stores and cleaning.

Currently, said the laborers, more construction companies hire them – especially for remodeling jobs – than do individual homeowners. One female laborer said Americans often wonder if an employee is legal, but Koreans – a growing population group in this area – don’t worry about that.

Bill Threlkeld, who ran the day-labor center in Herndon, said that, when that center opened, the employers were 60-percent businesses and contractors and 40-percent homeowners. But, he added, “After awhile, those numbers reversed.”

Noting that she and Pacheco were giving Centreville’s workers just a brief work on marketing, Uribe told them, “You need to do this more in depth. Survey all the workers and employers [for their respective skills and needs]. Also, check with facilities for senior citizens to see what help they could use. Then you can start to better define your marketing plan.”

Uribe advised them to send out postcards and place hangers on people’s doors listing the jobs they can do and the center’s location. “You’ll need to determine how many postcards and door-hangers you’ll put out a month and how much money you have to them,” she said. “Consider advertising in newspapers and on the Internet on Craig’s List, Facebook, etc.”

Threlkeld said that, ultimately, “The most-important marketing is word of mouth.” But, added Uribe, “The best marketing doesn’t mean anything, unless the work is good.” So she stressed the importance of workers making sure they stick to the jobs for which they have the most abilities and be honest about what they can and can’t do.

Pacheco said the center advertising should have a specific color and a simple logo, plus slogans stressing the capable, dependable and skillful work the laborers will do. Uribe noted that, in the District, “Some churches let the workers come in and tell the congregation about the work they do.”

Threlkeld said the Herndon center had a community work day during which center workers wore shirts with the center’s logo and showed that they were giving back to the community. And Pacheco said it’s also important that the worker center be “open to all cultures and races and to women, as well as men.”

The next meeting of the CIF is scheduled for Tuesday, Oct. 25, at 7:30 p.m., at the Centreville Regional Library.