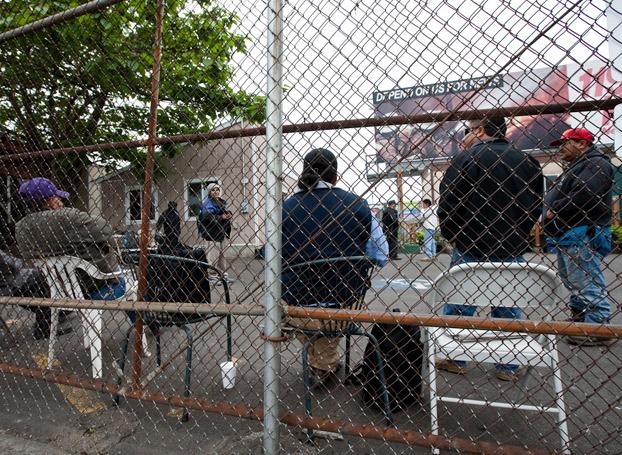 Lawmakers could have acted to shield day laborers from bosses who cheat them out of wages. Instead they turned their backs.

Sanchez had been standing on the corner of Northeast Martin Luther King Jr. and Lloyd boulevards, order hoping for a day laborer’s job, when a man drove up and said his boss needed help. The driver took Sanchez to a site where Hernandez’s company, Henry’s Quality Underlayment, was ripping out carpet and putting down vinyl flooring.

Sanchez says Hernandez agreed to pay him $10 an hour, and that he worked long days—without lunch breaks—for four weeks at houses in Portland and Clatskanie. He says he was never paid $1,700 Hernandez owed him.

Hernandez claimed Sanchez never worked for him. It was the driver who brought Sanchez to the site, he said, who had hired Sanchez. He didn’t owe Sanchez a dime.

“That’s when I decided to sue,” Sanchez says.

Sanchez says he was the victim of wage theft—when employers cheat their workers out of their pay. It’s a particularly big problem for immigrants and workers who take short-term jobs and often move from one employer to the next.

Wage theft can take many forms, from minimum-wage violations to cases like Sanchez’s, in which workers are promised money from employers who never deliver. A 2009 study by the National Employment Law Project, focusing on New York, Chicago and Los Angeles, found 1.1 million low-wage workers had been victims of wage theft, losing an average of about $2,600 from a $17,600 annual income.

In Oregon, the state Bureau of Labor and Industries, or BOLI, receives roughly 2,800 claims of wage theft each year.

Since 2000, the bureau has helped employees get back approximately $17 million in lost income.

“What happens in a typical case of wage theft is nothing,” says D. Michael Dale from the Northwest Workers’ Justice Project, a nonprofit legal service that helps immigrant workers fight wage theft. “It’s a huge problem. We are talking about millions of dollars of unpaid wages in the state of Oregon.”

Lawmakers had the chance to address the problem with five bills proposed by Dale’s group. But they caved in to business lobbyists. Democrats, after making a fainthearted effort to help workers, ditched the bills.

One measure, SB 611, would have helped workers like Sanchez by defining the employer-employee relationship, particularly for farm-labor and construction contractors. The bill died in committee after what Dale says was heavy lobbying from business groups.

“[SB 611] was just a very broad, far-reaching piece of legislation that would tremendously impact [the construction] industry,” said Jan Meekcoms, a lobbyist for the National Federation of Independent Business, who testified against the measure. She called Dale’s bills “extreme.”

The bill died. But another measure that would help people caught in Sanchez’s situation passed the Senate.

Hernandez, whose company did the work, claims he never met Sanchez. “I didn’t negotiate any wages when he started the job,” Hernandez tells WW. Instead, he says, the driver who picked up Sanchez, a man named Javier Galvans, should have paid Sanchez’s wages.

“I did not discuss wages, hours or other working conditions with Javier, rather only with [Hernandez],” Sanchez wrote in a Construction Contractors Board complaint.

SB 612 would have blocked employers from passing their responsibility to pay workers onto others. The measure requires day-labor drivers such as Galvans to register with BOLI as construction labor contractors. Bosses who get workers from unlicensed labor brokers would be on the hook for wages and civil fines.

The Senate passed the bill May 5 in a party-line vote of 16-13. Sen. Suzanne Bonamici (D-Northwest Portland), the bill’s carrier, said the measure would have “help[ed] to ensure workers receive the wages they are owed in an industry in which this has become a particular concern.” Republicans offered a different proposal that wouldn’t have made the contractor liable for the wages.

After that, the bill was orphaned in the House, where an even split between Republicans and Democrats means no bill gets a hearing without both parties’ agreement.

Since then, Bonamici says, she hasn’t pushed the matter any further. “I spoke on the bill because I was asked to carry it,” she says.

Dale says he hopes to build more support for his group’s measures in the 2012 session.

Meanwhile, Sanchez says he struggled to get by after he was denied his wages, and that his wife had to borrow money to pay bills. Last fall—more than a year after Sanchez did the work—the state contractors’ board worked out a settlement: Hernandez agreed to pay $1,000 of the $1,700 Sanchez says he was owed. Hernandez admitted no wrongdoing.

“I suffered a lot,” Sanchez says, “because he did not pay me what he told me he would pay me.”