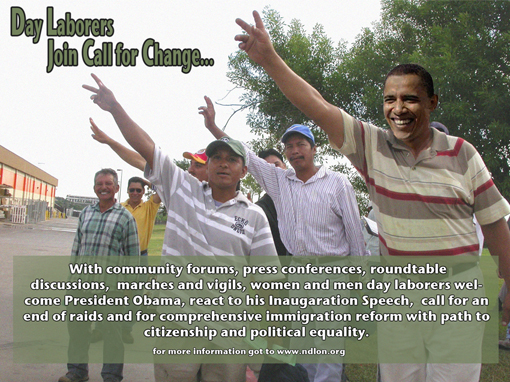 Day Laborers Hopeful as They React to Obama Inaugural Address

Day Laborers Hopeful as They React to Obama Inaugural Address
Send Clear Message Throughout the County:    “We will continue to organize for Change!”

Who:  Day Laborers
What:  React to Obama Inaugural Address
Where:  Events planned throughout country
When:  January 20 and 21

(Washington DC)  Day laborers, order   their organizations, and community partners will hold a series of press conferences, demonstrations, teach-ins, and discussions throughout the country  following the President-Elect’s inaugural address.     The events are part of a coordinated effort by the 41-member  National Day Laborer Organizing Network to ensure day laborers’ voices are heard as a new era of government begins in Washington DC.    The approximately 120,000 day laborers  who seek and receive work every day are hopeful for a change in US policy that will bring full labor protections, a restoration of civil rights, and a path to citizenship and political equality.

In the last several years, the Day Laborer Community has come under unprecedented assault by anti-immigrant politicians at all levels of government.   A strategy that sought to gin-up anti-immigrant sentiment to gain favor with voters has resoundingly failed.

“Efforts to demonize the day labor community brought us no closer to immigration reform, and it’s now clear the nativist movement was a paper tiger,” said Pablo Alvarado, director of NDLON.  He added,  “We know that any true immigration reform in the United States will draw upon the experiences and perspectives of migrants themselves, particularly those who are unfairly disadvantaged by our currently broken immigration system.”

President-elect Obama pledged during his campaign to make immigration reform one of his top priorities, and day laborers- like others in the migrant community- are eager to hear how he plans to deliver on those campaign promises.  They will gather in churches, on street corners, and at worker centers to collectively interpret the inaugural address and discuss plans to engage an Obama Administration moving forward.

“It’s time for less words and more action from Washington DC,” said Maria Marroquin of Mountainview, CA and NDLON’s Board Chair.  “We are hopeful that the era of immigrant bashing is behind us.”

In some places throughout the country, there is a greater sense of urgency for federal action.  For example, in Janet Napolitano’s hometown of Phoenix, Arizona, a local sheriff deputized himself to enforce federal immigration law and enlisted vigilantes to help in the process.   The result is a policy of scapegoating, racial profiling, and civil rights deprivations not seen in this country since the days of Jim Crow.       “There is nothing short of a human rights crisis in Maricopa County, Arizona,” said Salvador Reza of the Macehualli Day Labor Center in Phoenix.